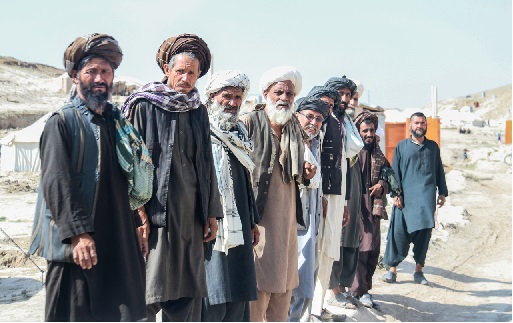 Kabul, Afghanistan, August 1 2021, refugee children after the collapse of the country in August 2021 by the Taliban in the North of the country

On August 15, 2021, the Taliban entered the Afghan capital without difficulty and took back power, twenty years after being driven out by NATO. Although the Islamic Emirate is trying to improve its image by advocating openness and inclusion, their ideological corpus remains intact. In this complex and multi-ethnic country, political and social life is bound to change rapidly. Thus, the Taliban’s accession to power poses multiple challenges and issues at the local, regional and international levels. A look at the security situation at the crossroads of Asia…

The Taliban: new masters of Afghanistan?

As early as February 2020, the Doha agreements signed between the Taliban and the United States provided for the planning of a definitive withdrawal of American forces within fourteen months. The pact also stipulated that the Taliban and the Afghan government in Kabul should conclude a ceasefire and organize the country’s peace process. The U.S. strategy was to ensure the security of the Taliban and its allies. The Taliban had declared that they would not allow « any of their members or other individuals or groups, including al-Qaeda, to use Afghan territory to threaten the security of the United States and its allies« . The Taliban’s « blitzkrieg, » however, demonstrated that the will of Mullah Omar’s heirs was to rule the country completely. « The objectives of the United States were not achieved. The Taliban had no interest in waiting for the formation of a government that would have been the result of lasting negotiations and that would have required compromises. They were and are the ones holding the cards today, » explains Karim Pakzad, associate researcher at the Institute for International and Strategic Relations (IRIS).

The fall of the historic bastion of the resistance has ensured the Taliban’s hold on the country. Ahmad Massoud, the son of the « Lion of Panshir, » had warned the Taliban even before the fall of Kabul that he would not accept a political regime in the hands of the group alone. « He had therefore proposed a coalition government. Nevertheless, Ahmad Massoud had the courage or the imprudence to fall very quickly into a military confrontation with the Taliban when the latter had conquered a very large part of the country, » says Karim Pakzad. He added: « He is working to establish a strong resistance to the Taliban« . Ahmad Massoud has called on the Afghan people « to rise up for the dignity, freedom and prosperity » of the country« . Nevertheless, it would be an effective and highly symbolic victory if the Taliban were to maintain their hold on the Panshir Valley and its strategic points. After the capture of this valley, located 80km north of Kabul, Taliban spokesman Zabihullah Mujahid welcomed : « With this victory, our country is now completely out of the doldrums of war« .

A sustainable stranglehold on the country?

The question today is whether the Taliban are able to hold on to power for long. « The historical Taliban, those in Kandahar, are in competition with other bangs of the movement, » says the IRIS researcher. In order to show their openness and to promote the unity of the country, the Taliban have appointed ministers and members of the government from an ethnic group other than the Pashtuns. « The existence of an Uzbek Mullah who agrees with the Islamic ideology advocated by the Taliban allows them to say that they are not a purely ethnic movement. In practice, this does not happen because the country is multi-ethnic. Power is tied to ethnicity, although no one claims it. In Afghanistan, we will never see a sharing of power between the ethnic groups, » says Karim Pakzad.

The Taliban know that the country’s different ethnic groups pose a significant threat to them. According to Mohammad Mohaqiq, leader of the Hazara community currently in exile, some 800 families have been expelled from Gizab district, which belongs to Oruzgan province and borders Daykundi province, populated by many Hazaras. This shia minority, which was largely persecuted by the 1996 Taliban, could then join the resistance front, if it manages to take shape and organize itself. « In practice, even if there is some distinction between this regime and the old one, there are no changes in the fundamentals, » warns Karim Pakzad. The new Taliban regime has many historical, ethnic and ideological opponents, which it will have to take into account in trying to unify the country. It remains to be seen what their strategy will be to achieve this objective…

The Islamic State in Khorasan: a lasting factor of unrest?

The ISK-P or Islamic State in Khorasan has established itself as an important player in the region. Its members are former Taliban defectors from the Haqqani network and former militants of the Tehrik-e-Taliban Pakistan (TTP). They are active in the eastern parts of the country, in Kundar and Nangarhar, on the Pakistani border. The Taliban and the ISK-P clash for ideological and clan reasons. The Islamic State’s religious doctrine rejects the concept of the nation-state, in contrast to the Taliban. « Daech is a universalist movement, which does not know the existence of borders, ethnicities and even nations. The group knows only the Ummah. This is why they have resurrected the caliphate and would like to extend it to the world, » explains Karim Pakzad. The Taliban are more conservative and fundamentalist. They want to apply sharia law, but only in Afghanistan. Their political project is therefore in direct opposition to that of Daech. Moreover, the Islamic State in Khorasan has made Shiite minorities a prime target, considering them apostates.

Through its network, ISK-P has many resources to rally new members to its cause. The discourse advocated by the group seems to be gaining ground, particularly in universities, among a young public that rejects the nationalist vision of the Taliban and the necessary accommodations with the United States and regional powers, and is more sensitive to the revolutionary nature of the Islamic State. It is worth noting that in 2018, 41% of the population was under the age of 14, and the median age was around 18.

According to a U.N. report published last July, the group has formed sleeper cells, particularly in Kabul and Pakistan, and has between 500 and a few thousand fighters. « The balance of power is currently in favor of the Taliban, but that can change. The internal division within the Taliban may play into the hands of Daech. The Taliban made the mistake of opening the prisons: 300 members of Daech have therefore vanished into thin air« , continues the researcher. The Taliban have now been given the task of fighting terrorism in the territories they control. The Pentagon has already explained that it will pass on information to the Taliban to combat the terrorist threat of ISK-P. The fight against Daech promises to last and to invite regional actors to take part in the conflict.

Towards a redefinition of geostrategic alliances?

The Taliban’s rise to power is reshuffling the cards in diplomatic relations between the Islamic Emirate and regional powers. Several countries have therefore taken advantage of this change of regime to develop new partnerships. The foreign minister of the Taliban government, Mawlawi Amir Khan Muttaqi, said that China would be the country’s main economic partner. China has promised not to interfere in the country’s political affairs. Instead, it is interested in the mineral wealth of the Afghan subsoil. Iran, for its part, is establishing diplomatic relations to ensure that the Shiite Hazara minorities will not be persecuted, but also to combat the major security threat posed to the region by the ISK-P. The former Persia, Russia and the new Taliban government could also work together in the fight against drug trafficking, at a time when Afghanistan is home to 80% of the world’s poppy production.

Pakistan, which borders Afghanistan and played a leading role in bringing the Taliban to power in 1996, is making sure that the new government in Kabul is favourable to the Taliban, against a backdrop of extreme tensions with India. Former Pakistani general Zia Ul Haq explained the need for Islamabad to influence its neighbor: « It is up to us to ensure that the water boils at the right temperature in Kabul« . The Afghan government cannot be neutral towards Pakistan. Pakistan’s strategic game is perilous, especially through the operations of its intelligence service, the ISI. While encouraging the radicalization of part of the Pakistani Taliban youth, in order to better counter the Hindu threat, the Pakistani army must fight against the most radical fringe of the latter who oppose Islamabad. This radicalism led to the creation of the « Pakistan Taliban Movement » in 2007. Pakistan is aware of the danger that unity between the Pashtuns on both sides of the border would pose to the unity of the country. Afghanistan, a country ruled by the Pashtuns, has never recognized the validity of the border line. Even the Taliban in power between 1996 and 2001 did not recognize the border between the two countries drawn by the British at the end of the 19th century. Moreover, from the beginning of the creation of Pakistan, there was a nationalist and independence movement that did not recognize the validity of the border either. Omran Khan, the Pakistani Prime Minister, himself of Pashtun origin, explained on October 2 that he is counting on the Afghan Taliban to facilitate negotiations between the government of Islamabad and the Pakistan Taliban Movement, thus admitting the proximity that exists between radical Pashtun movements of the two countries. It appears that the regional powers have already established diplomatic relations with the Taliban, thus acknowledging them as a legitimate government. Qatar, an important mediator in this diplomatic thrust, had explained the method that international partners should adopt: « a very rational approach, and not an emotional one, in order to clearly show the Taliban the benefits of talking« .

What about the role that France can play? « On the political level, France can play a role within the European Union. Even before the Soviet invasion, France was the most loved country in Afghanistan. It had a lot of influence there, because instead of looking for geostrategic positions, it invested from the beginning of the last century in education, health and archaeology. The oldest French high school, based in Kabul, will soon celebrate its 100th anniversary, » says Karim Pakzad.

France, notably through its humanitarian organizations, could then continue to play a role in supporting the Afghan population and promoting the education and health of Afghan women and men…