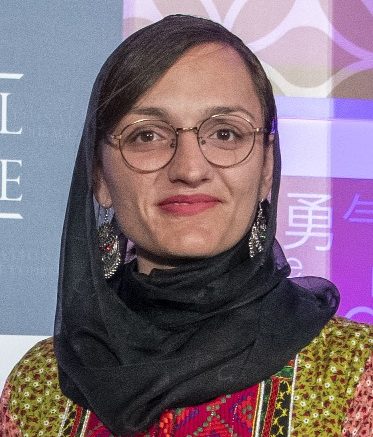 Designated mayor of the Afghan municipality of Maidan Shahr in 2018 at the age of 26, Zarifa Ghafari was the youngest and one of the first women to head an Afghan executive body. As the humanitarian situation in Afghanistan darkened since the corrupt government collapsed under Taliban violence on August 15, the one who left her province with only a handful of sand – as a piece of her country – wants to rise her voice on behalf of all those who are speechless to share their hopes for a brighter and better future.

The stubbornness as a guide

Chosen as an International Woman of Courage in 2020 by the US Secretary of State, Zarifa Ghafari has demonstrated an unwavering perseverance since her childhood. Growing up against the backdrop of the war in Afghanistan, she became intimately familiar with the struggles women and girls face, by witnessing the disruption and devastation caused by terrorist attacks on her daily commutes to school.

Despite the discrimination she suffered at school because she was a girl and the heavy load of domestic work she had to do to help her family, Zarifa Ghafari achieved excellent results placing her in the top 10 of Afghan students. Results that allow her to continue her studies in India. Back in the Wardak province of Afghanistan, in 2014, she served her fellow citizens by starting her own women’s rights NGO focused on economically empowering them by training workshop and creating a radio station called Peghla FM – the Pashto word for “young girl”- dedicated to educational programs.

When she applied for the mayoral position in Maidan Shahr driven by her willingness to help others, she discovered that she was overwhelmingly outnumbered by male candidates. That inequality simply motivated her more. “I wanted to prove that this was not normal, and that we needed a change. As women we are also part of the society” she declares. In her largely Taliban-controlled province of Wardak, she regularly faces death threats and has even been the target of several assassination attempts preventing her from taking office for nine months. “When I started my job, men at the municipal office refused to acknowledge me and my authority. They chase me away but I came back. I came back and I stood my ground” relates Zarifa Ghafari. Animosity towards her peaked, last year, when her father was killed in front of his home as a warning for her. Although she regrets the fact that her life decisions have endangered her family, nothing stopped her from rising her voice, doing her job and achieving an ambitious program. She fired corrupt officials, embarked on urban planning to comply with environmental projects, and created plans for new children’s play areas and women-only marketplaces. “After two years of work, what I am proud of is that the people of my city and those who are watching me daily, are believing in women’s power, women’s ability as a leader and as a top official in office” affirms Zarifa Ghafari.

Although she had to give up her position and leave her country as well as the achievements that she was fighting for several years, Zarifa Ghafari continues to act for her community. “While I was sitting in my home resigned to die I thought that I could not make that choice. I thought, « If I die, the cause of Afghan women will be further silenced.” Even though it was heartbreaking, I left my country to preserve my voice. My voice has the power that no guns have » she says. Her priority is now to rise the flag for the unspoken women and children of Afghanistan to the international community and media. « The only thing I want from all women around the world, and especially women in politics, is that they speak up and give their support to Afghan people who are fighting for their fundamental rights”.

Zarifa Ghafari has confidence in those she called “her sisters” and it was for her a great hope to see dozens of women demonstrating in the streets of Herat to voice their rights and demand an inclusive and respectful government. “We will not stop. The more they will try to silence us, the louder we will speak. They will not be able to ignore us » affirms the former mayor of Maidan shahr.

“The Taliban’s higher education acting minister pledged, in the first days of his tenure, that women could continue to study in universities and graduate programs, as long as they were in gender-segregated classrooms” Zarifa Ghafari developpes. A statement in line with previous announcements regarding women’s rights that the Taliban have vowed to respect. “Their words never match their actions. I don’t expect anything from them. I already know who they are« . Sinister illustration of Zarifa Ghafari’s words, the new government sent, since then, an ominous signal of its intentions toward young women : the Ministry of Women’s Affairs building was converted into offices for the religious morality police, who brutally enforced Shariah law two decades ago. The building now houses the Ministry of Invitation, Guidance and Promotion of Virtue and Prevention of Vice.

Former mayor of Maidan now relies on the international coalition. “Taliban are in power. We have no over choice than to talk to them. We have to negotiate and to collaborate to preserve the achievements of the last twenty years. I want to talk to Taliban and their leaders. I am ready, so I need international community to pressurise them to sit on the negotiation table back. It does not matter where and when, but they need to start a negotiation, with women, on women’s rights. Taliban must adapt to the reality on the ground, women represent 50% of the country’s population and are a vital part of the country’s development, without them the Taliban will not be able to govern the country ” calls Zarifa Ghafari. After the chaotic withdrawal of American forces from Kabul, the future of the Taliban regime depends in part on the attitude of the Pakistani power, its army and its secret services. “I also call on the international community to ask Pakistan to stop its interference in Afghan politics. Only after that can we find a lasting solution for the country and its people” appeals her.

In the next months, Zarifa Ghafari is going to try to obtain a special European permit. Indeed, she does not want to be a refugee, but wants to travel to continue tirelessly raising awareness of the situation in her country. With only one dream : “I would go back in an appease Afghanistan. I would love to take the small amount of sand I took from my country back to where it really belongs”.