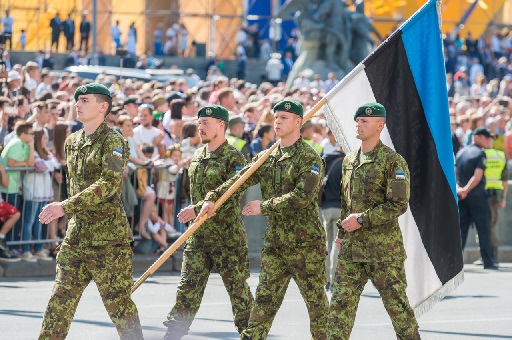 Estonia is a European and NATO leader thanks to its large defence-oriented investments and its appetence for cyber. Facing the Russian threat since its birth, the country aims to find a balance between its need for reliable and operable defence equipment, and the necessity to keep implementing its state-of-the art infrastructure, competence and innovations from the cyber department to its entire defence apparatus. Part of the solution with Tomas Jermalavi

Since its second independence in 1991, Estonia is feeling threatened by Russia. This was reinforced by Moscow’s interventions in Georgia, in 2008, and in Crimea in 2014. The latter highlighted the necessity for Tallinn to enhance its military capabilities and focus on territorial defence and deterrence strategies, in cooperation with NATO and under the American umbrella.

If, as pointed out by its Ministry of Defense (MoD): “Estonia’s defence strategy has long called for a (…) ‘broad-based’ defence”, the country can rely on its leadership in cybersecurity as it is “ranked third globally and first in the EU in the Global Cybersecurity Index 2020”. This leadership was developed in response to the Russian cyberattacks of 2007, that also defined a few key goals in the minds of Estonian leaders to ensure their nation’s security. Those are investments in cybersecurity, strengthening collective defence and deterrence via NATO, and growth of military interoperability with key allies and partners.

Major elements of the Estonian defence innovation policy can be found inside two documents – the R&D Policy and the Defense Industrial Policy. “The newest iteration of the former was approved in June 2021 to cover the period until 2030”. Endorsing a strategy of prioritization and “smart specialisation”, as promoted by the EU, and encouraging the dual use – civil and military – of investments in strongholds of the Estonian economy are instances of new policy orientations.

These are needed because of the numerous challenges faced by the country. One of them lies in the limited number of human resources, explaining why Estonia relies, at least partly, on foreign talents in the cybersecurity department. This phenomenon is undermining security innovations as there is a “reluctance to allow foreign talents (especially from non-NATO and non-EU nations) (…) to come close to (…) cybersecurity and cyber defence.”

Tallinn also lacks financial resources. Even though Estonia spent 2% of its GDP on defence during the last decade, “its annual defence budget (…) is less than a billion euros (…), with €77.9 million spent on equipment procurement and just €3.1 million on R&D in 2019”. So, its limited resources are prohibiting Tallinn to engage in long term R&D, so the government choose to invest in robust, efficient, innovative, and well-tested acquisitions.

To tackle these problems, the MoD works hand in hand with civil society and private companies, mainly through “an annual grants competition with a budget of €600,000, in which enterprises can bid for the MoD’s support grants of up to €200,000 in order to develop innovative solutions”. This process has become more efficient and competitive over the years and testifies as to the country’s will to incorporate autochthonous initiatives into its defence apparatus. Estonia also displays its ambition to boost its defence exportations to develop its budget.

There is an effective dynamic of centralization and structuration of the Estonian defence innovation policy. That is illustrated by the creation of the Estonian Centre for Defence Investment (ECDI)which handles procurements under the MoD. Also, the Applied Research Department of the National Defence Academy (NDA) has become a focal point for civil companies trying to engage with the military on innovative defence initiatives. The Estonian Defence Industry Association (EDIA)provides a platform for interactions between the industry, R&D organisations, and the government and the Defence Estonia Cluster works to increase “the export volume of Estonian defence and security industry tenfold by 2029”.

As for cyber, Estonia proves its appetence and leadership. Host of the NATO Cooperative Cyber Defence Centre of Excellence (CCDCOE) since 2008, the country equipped itself with a “platform for the experimentation of new concepts and the development of new products and services in cybersecurity and cyber defence” named CR14. It can become a hub for training exercises, innovation testing, channelization of innovative technologies in the country’s defence apparatus and collaborative projects at the EU’s scale.

With limited possible applications and areas of focus

Nevertheless, Estonia’s land forces are composed of two brigades and reservists, whose objectives are protecting territorial integrity and acting as a tripwire in face of an aggression, triggering a NATO response. Operability is preponderant. Therefore, “some officials argue that (…) it is necessary not to become too dependent on expensive high-tech instruments” which could be too complex for reservists to use.

The country promotes its sovereignty in terms of defence innovative initiatives, but there is a difficult balance to be found between operational requirements and innovative technologies. To Tallinn, autonomy is a matter of prioritisation. It can be reached in some niches and must target Estonia’s areas of expertise – meaning, first and foremost, cybersecurity.

With this in mind, “AI-related innovation is also becoming a major area of interest” for the state, that fears an EU policy impinging “upon the development of military AI in the future” as well as a Russian militarization of this technology. In terms of military robotics, Estonia is a “success story” and “strives to become a European centre of excellence” thanks to technology extensively tested, including in Mali. However, Tallinn might not keep its edge much longer, as “European nations have recently caught up”. The country also actively develops “systems to counter these capabilities and provide smart surveillance solutions” and “health data technology and industry is rapidly taking shape in Estonia”.

What cooperation with Europe?

This Baltic state has always been sceptical towards European defence initiative as it is greatly relying on NATO and the American umbrella. Their political course is to avoid the duplication of and the competition with NATO structures leading to a pragmatic approach based on the pursuit of their strategic interest.

Nonetheless: “new European instruments that stimulate the growth of competence, competitiveness, and innovation of industry and science (…) have become a major attraction to Estonia”. And the country acts on it. Their “proactive stance and comprehensive approach have paved the way for Estonian enterprises to be involved in ten further successful projects (…) securing €16 million of European funding”.

If “at the strategic level, innovation is constrained” – it is because Tallinn chooses reliability and operability over innovations. The government has gained structure and competence in procurements but still struggles to identify innovative solutions and successfully incorporate them into their plans. However, thanks to a “vibrant innovation ecosystem”, there are “new economic opportunities” and a gradual transformation of the military culture“towards greater openness to innovation and more systematic and structured collaboration with the developers of innovative solutions”. In conclusion, “if those projects deliver results that satisfy real military needs and provide cost-cutting solutions that are robust, reliable, and reduce complexity” Estonia will reinforce, in the long run, its place as a European and NATO leader in both the defence and cyber departments, guaranteeing furthermore the safety of the nation.