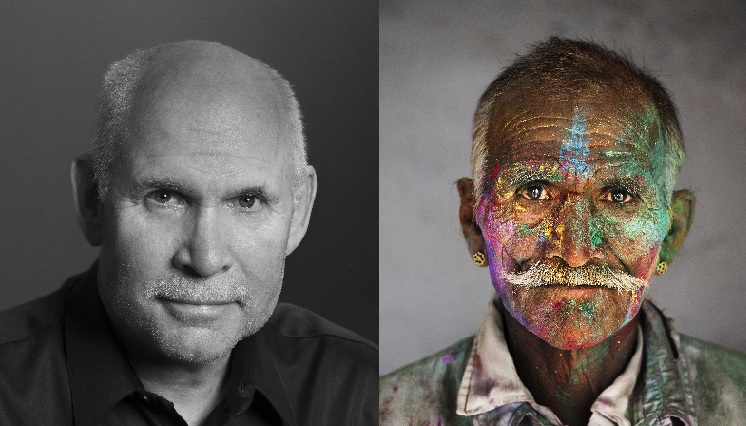 His work has been shown in Paris for the last six months for an exhibition that is receiving praises. Steve McCurry has been photographing the world, including scenes of conflicts, for over 40 years and his relevance stands still.

Visitors wander in the softened-lighted rooms. In front of each photograph, they stop, in silence. The bright colors subjugate. The piercing looks on the images intrigue. Everyone there knows they are looking at some of Steve McCurry’s best pieces. Yet, in this exhibition shown in Paris from December 9, 2021 to May 29, 2022, no explanation comes with the art, as we could see in other exhibitions. “I think people see a picture and make up their own story in their imagination”, justifies Steve McCurry. “They create a narrative that gives meaning to the picture and sometimes their own interpretation is more interesting than the actual story.”

Yet, his actual story is interesting. Steve McCurry was not always the photographer we know today, exposing his work all over the globe. In the late 1970s, the young man who had always lived in Philadelphia (USA) started his career as a photojournalist for a local newspaper. “It wasn’t about my vision then”, he says. “They had their own set of requirements. I had been shooting in black-and-white and learning the basics of photography. I learned how to size up a situation and how to work quickly.”

With that knowledge in mind, McCurry left for India. In 1978, without an extensive knowledge of the country, he decided to go on this adventure with his camera. “ I did not hear many stories about India as a child. I remember looking at the New Zealand photographer, Brian Brake’s Monsoon essay from Life magazine in 1961 in the basement of my grandparents’ house and was inspired to experience the monsoons in person. The monsoon story was about the renewal of life. If the monsoon fails, it’s life-threatening, and if there’s too much rain there’s the danger of flooding. So much of the agricultural economy and way of life in the villages depends on the monsoon; it is an important part of the Indian psyche. I thought that story was enormously important.” So, he went and told it.

“For me, photography is literally about wandering, observing and telling stories whether it’s portraiture, human behavior, or how we live on this planet”, shares Steve McCurry. “From my early days of photography, I’ve always felt the influence of André Kertész, Walker Evans and Henri Cartier-Bresson whose works demonstrate that profound and universal storytelling is considered art. For me, it’s always about the feel of the place and the emotion.”

After having “learned so much patience in India”, the photographer felt the urge to go even beyond what he knew and what felt comfortable. In 1979, without visa or authorization whatsoever, he entered Afghanistan right before the Soviet invasion. Disguised as a local, his film rolls sewn onto his clothes, he spent time in the war-torn conflict.

It was around that time that Steve McCurry shot, in a refugee camp in Pakistan, what probably is his most famous photograph: The Afghan Girl. Her green eyes touched the whole world as it had struck the photographer. “Most of my images are grounded in people and stories. I look for that unguarded moment and try to convey some part of what it is like to be that person, or in a broader sense, to relate their life to the human experience as a whole. The choices I make when photographing are influenced by the stories I want to tell. My portraits are mainly chance encounters – people I meet on the street. When someone catches my eye, when they have something particularly compelling about them that grabs my attention, I will stop and talk with them for a few moments and take their picture”, he now explains.

Steve McCurry learned the name of this girl years later, in 2002, when they met again during another one of the photographer’s trips. Then, he photographed Sharbat Gula once again.

Afghanistan was the first war he covered as a photographer. After that, he flew to many scenes of conflict. Though he obviously never fought alongside troops, he doesn’t feel like a bystander. “The human drama in such areas can be difficult to comprehend. I think documenting these dire situations and giving a voice to the people who aren’t able to tell their stories is what photography does best. Although I often work in areas rife with conflict, the images I make are about the people themselves.”

Steve McCurry won’t cover the current Russian invasion of Ukraine. He is currently “working on two books which are exciting because they are a departure from what [he has] done in the past”. Europe and the United States can also expect more exhibitions from him in the next months. And whatever the project, Steve McCurry keeps the same philosophy : “For me, the goal is to find some sort of universality among people and common humanity across a huge variety of conditions – if I am successful in this, the image should be universally understood by anyone who has experienced the human condition, regardless of their individual circumstances.”