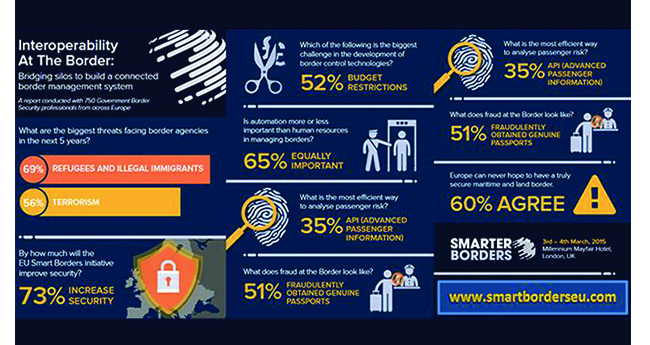 In light of last week’s terror attack in France, it’s sadly not surprising that 56% of Senior Border Security Professionals, who took part in a recent survey about challenges facing EU Borders in 2015, highlighted Terrorism as one of the biggest threats to safety at European borders. 69% cited that Refugees and Illegal Immigrants would be a major threat to border agencies in the next 5 years.

The survey has also revealed 73% believe that the 2013 EU Smart Borders initiative will increase security in Europe. This scheme proposes to speed-up, facilitate and reinforce border check procedures for foreigners travelling to the EU. The remaining 27% however think that this is not enough of a comprehensive plan to ensure security at borders.

52% of Border Security Professionals agree that budget restrictions are the no.1 challenge facing the development of border security in the EU. Is it time for more money to be spent in this sector?

These topics and more will be hotly debated, by the likes of Krum Garkov, Executive Director of eu-LISA; Keith Vaz, Labour MP for Leicester East and Chairman of the Home Affairs Select Committee, UK and Kenneth Sava, Director of the Trusted Traveler Program, U.S. Customs and Border Protection; at the Smarter Borders meeting 2015, at the Millennium Mayfair Hotel in London from the 3rd to 4th of March.