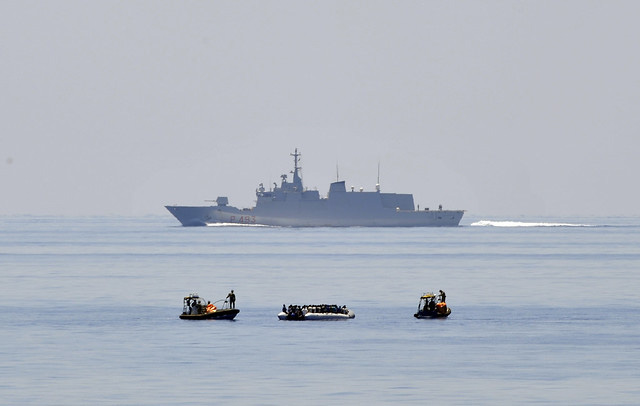 There could be over 143 million internal climate migrants across Africa, South Asia and Latin America in the next three decades. Last year, the World Bank issued a report that aimed at raising awareness on the growing issue. Since then, the alarm bells have not stopped ringing.

After an extremely dry summer, Iran and Iraq now fear the Tigris might burst its banks and flood the surrounding inhabited valleys. While the lack of drinkable water is still heavily problematic in multiple regions, sea-level rise, and floods in general, have become the prominent risk to tackle among the many threats induced by climate change. In 2018, the National Academy of Science of the United States studied “Four decades of Antarctic Ice Sheet mass balance from 1979-2017”. The result is rather disturbing : Antarctica’s ice is melting faster than scientists thought, and a single meter rise of sea-level could flood the coastal areas of the globe, where most of the metropolis are located, and many of the smallest islands.

Given how pressing the situation looks, infrastructures and cities need to be bettered. Even though some areas seem to be more exposed to water-related damages – the Pacific being the first target since eight of its islands, at least, had been submerged in 2017 – no state should run the risk of sitting idly by. In fact, several have already started to act to prevent the unexpected effects of climate change. The U.S. Department of Housing and Urban Development (HUD) launched a design competition in 2012, after Hurricane Sandy devastated the East coast of the country. What aimed to be the first step towards better resilience turned into a stable organization : Rebuild by Design. “We work with government and communities to come up with projects for resilient infrastructures to resist climate change. Lots of our projects are linked to water”, explains Amy Chester, Managing Director of the organization. Rebuild by Design is currently involved in seven projects in the hurricane Sandy region. One of them, the Big U, has been designed and is being held by Bjarke Ingels Group (BIG). It aims at protecting Lower Manhattan from floodwater, storms and other climate-change-induced catastrophes by raising East River Park up to 3 meters to prevent sea-level to reach it. “The project has been redesigned since 2012 to match with what we know now of sea-level rise”, says Amy Chester. As in all the projects Rebuild by Design sponsors, the social aspect of the project has not been forgotten. “We bring in experts to build safe and resilient projects, but we use the feedback of the communities as well. They are giving guidelines on whether some amenities of the area should stay”, clarifies the Managing Director.

Relying on historic and recognized experts

In Europe as well, actions must be taken. In Athens, the American organization is working to prevent the erosion linked to floods, dry spells, and flows of visitors of the Lycabettus Hill. By identifying the issues linked to the hill and its core role in Athenians lives, the organization hopes to give an impulsion to many resilient projects to protect the hill, which is part of Greece’s heritage. Further North, the Netherlands is, without a doubt, one of countries most affected by sea-level rise in the EU. It is also one of the few which have already put actions into place to contain the problem, as long as possible. The Netherlands has 26 % of its land located below sea-level. Working on making the infrastructures resilient started to appear important as early as in the 1950, long before climate change and global warming were strong preoccupations. Since then, the coastline has been reduced by 700 km and multiple dams and barriers have been built to protect the coasts from being flooded. “Rebuilding by design” is a Dutch thing. It has been for quite some time. “We have learned a lot from the Netherlands. There are many experts there and they are teaching other cities how to tackle the issue”, admits Amy Chester. The Deltares Institute is a key actor in the field. Its expertise on water regulation has become an unmissable help for delta works in the Netherlands, and the rest of the world. Deltares partners with governments, municipalities, universities and companies to find the best alternatives to protect life in at-risk areas. From field studies to software solutions to foresee floods, for example, it has already protected millions of individuals against sea-level rise and floods. The institute even won a prize for its work on the Dutch project “Ruimte voor de rivier” in 2018.

As time goes by, and sea-level rises even more, climate migrations won’t exclusively be internal anymore. Less exposed continents and communities will likely have to welcome refugees across their borders. In the EU, the Syrian migration crisis and its aftermath proved the process was flawed. But this is a wave that we can see coming from afar. The policies, the regulations, the organizations must take place, so everything is set when it hits.

Learning from other countries’ mistakes and our own is essential. In that case, one may not want to follow the steps of Australia’s management of migrants. The Australian government has been entangled in a rather controversial affair for over 5 years. In 2012, it started sending people seeking asylum to the Pacific Islands of Nauru and Papua New Guinea for “offshore processing”. Since then, these centers have been the subject of a lot of criticism and backlash. In its World Report 2019, Human Rights Watch denounced : “Australia has a strong record of protecting civil and political rights, but serious human rights issues remain. In 2018, the government continued to hold refugees and asylum seekers who arrived by boat in Australian waters on Manus Island in Papua New Guinea and on Nauru, marking more than five years since the reintroduction of its draconian offshore processing and settlement policy.” To make sure that this controversial policy, which let hundreds of people, including children, live in unsanitary conditions for months, even years, a political momentum is longed for.

For the past four years, the UN has tried being the leading political force. The first step came during COP21, when the UN Task Force on Displacement was created under the aegis of the UNFCCC (United Nations Framework Convention on Climate Change). It aims at “looking at the linkages between displacement and climate change in order to provide recommendations on possible solutions.” In spite of many meetings and initiatives – including the creation of the state-led Platform on Disaster Displacement (PDD) in 2016 – taken by the international actors these last years, the task force urged the UN as a whole to push the issue further, last September: “The UN currently lacks a system-wide lead, coordination mechanism, or strategy on disaster displacement, including related to climate change. […] Functions and activities related to disaster displacement and climate change are dispersed across multiple entities and processes, and such efforts are not necessarily aligned or based upon comparative advantage. The specific needs of displaced people may be overlooked, potentially leading to protracted displacement situations. The lack of overall leadership also impedes the UN system’s ability to provide effective country-level program support for States most affected by displacement related to climate change, and to ensure coordinated contributions to relevant international frameworks and processes.” In other terms, the PDD cannot be the only dedicated actor trying to develop coherent and harmonized policies related to displacement.

“We are better prepared in terms of the assistance we can provide to the European members than we were in 2015 ; we have a stronger mandate, points out Izabella Cooper, spokesperson of Frontex, the European Border and Coast Guard Agency. Even though the number of arrivals has been consistently dropping since 2015, we remain vigilant”. Indeed, the EU went from having to deal with a million irregular migrants in 2015 to 150,000 last year. Yet, the management of climate change induced-migrations does not differ from the other causes of displacement. “We are providing member states with additional technical assistance on border control, surveillance and rescue at sea whatever the reasons for fleeing might be”, reminds Izabella Cooper. To her, migration is a gradual process that cannot be linked to only one factor. Still, she insists : “Frontex is becoming bigger, thanks to our mandate, currently under revision, but migration cannot be resolved by border control alone. We need to eliminate the root causes of migration, stabilize the situation in the countries of origin and of transit as well as dismantle the criminal smuggling networks. A common EU-wide agreement on migration and asylum is needed. When it comes to fighting serious cross border crime, we think good risk analysis is essential, because it’s all about sharing the information with the states and Europol”.

For a common agreement to be found, the international organizations and the national governments could rely on the words of Behrouz Boochani, a Kurdish-Iranian journalist held on Manus Island for five years: “Our resistance and the three weeks of hardship we endured produced a new perspective and method that was remarkably transformative. […] We learnt that humans have no sanctuary except within other human beings. Humans have no felicitous way to live their lives other than to trust in other humans, and the hearts of other humans, and the warmth within the hearts of other humans.”1