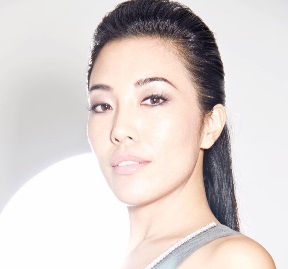 “The medium is the message  » this leaves little doubt for Krista Kim, a disciple of Marshall McLuhan, who sees in every technological development the dawn of a new civilization. As the digital revolution become faster and more disruptive than ever before, the time has come for artists to adapt, express themselves and participate in the creation of tomorrow’s culture and society. With the advent of a computerised civilisation, digital art is not only a matter of technology but above all of humanity.

Digital art as a meditative experience

Resolutely forward-looking, the founder of the Techism movement, started to question, in 2013, the expressionist painting in which she had been trained during her studies at LaSalle College of the Art in Singapore to devote herself to digital art as a new way to create a sublime experience. Krista Kim’s artistic research used the tools of transcendental meditation, that she had learnt and experienced while living in Japan several years ago, as part of her creation process. There, she developed her affinity for zen art. “I was at the Ryōan-ji temple garden in Kyoto when I really experienced, for the first time, an epiphany about art. The Buddhist monks who created this garden made an artistic experience that changes the viewer’s brain state. The environment is spare and empty space gives the impression of a void in the visitor’s mind. Changing of mind state : that is zen.” she enthuses.In 2013, as she wanted to create a balance of our consciousness in the digital world she began to explore meditativeness in digital language.

“The social media platforms that we have been using for more than a decade are not designed for humanity but for commerce and for using us as a product. Our human weakness is being used against us so that we will spend and waste as much time as possible and engage in toxic, sociopathic narcissistic behaviours on social media platforms.” Krista Kim links the massive use of digital platforms with an unprecedented increase in the number of depressions among young people. She wants to create a cultural counterpoint to relentless distraction and parasitic technologies by developing a metaverse dedicated to meditation using technology as a tool for wellbeing. “When I create digital art it’s always about creating a state of pure consciousness in the viewer like in a digital zen garden” Krista Kim explains. Like a new digital Rothko, she seeks to transform the experience of the viewer. The later no longer looks passively at an image, but contemplates a mysterious coloured surface which is like a mirror revealing his own sensations.

In front of the digital revolution and the social upheavals it is causing, Krista Kim wrote, in 2014, the Techism manifesto laying the foundations of a new digital artistic movement. A movement based on the synergistic blend of art and technology, where the act of creation using digital media will safeguard and perpetuate human values ​​such as empathy, authenticity, and free will. “We cannot allow the creation of a new civilisation to rest in the hands of companies with only commercial aims and their engineers.” she argues. Many technology companies ignore their ability to design culture. Humans are now engaged on a daily basis with devices and platforms developed by these companies and fuel micro behaviours, which, when compounded over time and scaled to billions of people around the world, create culture. “Art has always ensured that humanity is served and expressed. We need more artists and people trained in humanities engaged in the leading age of technology, collaborating with engineers and entrepreneurs to elaborate the next generation of technology so that it is more human”.

Colour gradient as the embodiment of fluidity

“Light is the new ink » repeats Krista Kim like a mantra. The one who has always been fascinated with the effects of light on the human brain seeks to use the power of colours to instil general awareness. “Light is nourishment and different frequencies of colour affects us physiologically, especially digital light. We are looking at screens every day and screens are instruments which deliver frequencies of light into our cerebral cortex, modifying our mind state.”

Beyond the physiological effects of the light spectrum, the coloured gradient draws its sublime from the representation of a new digital human. “The digital medium refers to the new cultural paradigm of fluidity. A fluidity that breaks free from religious, cultural, and nationalist dogmas that constrain people. Systems of the past were very conformist, dividing and static and could be represented by solid blocks of colours. Digital communication allowed people to meld and to adopt a more global idea of the world inspired by social interaction. The gradient, through its inherent mixtures of colours, embodies the existing possibility of fluid sexualities, religions, opinions and identities« . The metaverse, embodied by her Mars House is thought by Krista Kim as a space where divisions can be transcended. Colourful lights also echo the dawn of political and financial decentralisation initiated by digital means.

The Art Nouveau of NFTs

A major Krista Kim’s piece of work, the Mars House, a 3D digital file that can be experienced in virtual reality, is the first NFT (non-fungible token) digital home to exist. Based on blockchain technology, NFTs act as digital certificates of ownership and enable digital artworks to be bought, sold and collected. The use of NFT technologies by the artist does not only ensue from the nature of her artwork but also from a philosophical choice favouring the democratisation process in the art field. “NFTs are giving artists the opportunity to be more sovereign in their practices and careers. The NFTs are a decentralised and disintermediate market, allowing artists to be more independent from the system of art galleries. Transparent and permanent record of transaction and ownership on the Blockchain change the conventional structure of the traditional art market. Furthermore, artist receiving royalties for resealing of they work is a major shift in how they are participating in the market. They are creating and making the market now”. Democratisation is also provided by new ways of ownership. NFTs allow fractioning ownership of art based on co-investment through tokenization or participation at a DAW affordable for everyone. If it is still a concept mainly use by tradition galleries as a marketing tool, Krista Kim is confident about the future of these decentralised models of art ownership.

“When you are putting more capital from the sale of work back into the artist studio, that, later, will put more investment to social capital and art for the community” adds the founder of a foundation, financed by the sale of the Mars House, that support a world tour of healing sound and light art installations for mental health and healing.

“Digital art and NFTs are game changers. They represent powerful vehicles for social change if used in the right way. If artists can actually see the potential of these technologies, it would be possible to change the world in a positive and optimistic way” she concludes.