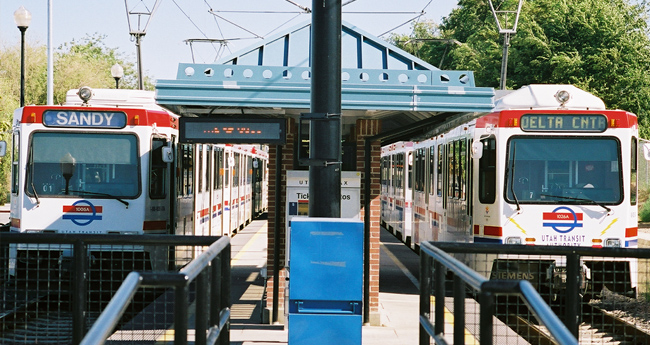 Previously, UTA’s video security system was limited by the capacities of its servers. In 2013, it reached the maximum of 500 cameras operating on three servers, which made it impossible to expand the system. UTA was building a new line out to the airport, and was eager to improve the surveillance to a much larger video system that would also be more efficient.

UTA enlisted Stone Security who helped determine that Milestone XProtect video management software best suited their needs. In 2010, Stone was named the Milestone Systems Installation Partner of the Year. In 2013, they were named Regional Partner of the Year and became the world’s first Milestone Diamond Reseller. As a Utah-based company, Stone also had the advantage of being familiar with UTA’s structure and requirements.

As of early 2015 UTA has deployed over 1,000 cameras from a mix of vendors: Axis, Panasonic, IQEye and Digital Watchdog. The system runs on nine HP servers provided by BCDVideo. With all of this in place, UTA can expand to 2,000 cameras or more. The security cameras are accessible by dispatch, commuter and rail control centers and other authorized users.

As an organization committed to providing passengers with an optimal riding experience, switching to the Milestone system allowed UTA to put more cameras on platforms while centralizing the control system. Milestone reduces the time spent by UTA employees attending to security issues without burdening riders. In addition, the significant improvement in video quality makes it easier to monitor and investigate incidents.

Brent Edmunds, co-founder and president of Stone Security, says: “Milestone marries two critical components for them: a centralized system and a lot of diversity in its deployment. The system supports many different kinds of cameras. We knew that UTA envisioned operating a robust security system that was both easy to operate and flexible.”

The Milestone open platform allows a “best of breed” software integration model that ensures UTA’s system isn’t tied down to any one technology. It accommodates future growth and expansion. The flexible storage options also let UTA change its hardware options at any time.

The new technology has had an immediate positive financial impact for UTA. For example, gate arms frequently get damaged or broken off by vehicles. Prior to Milestone, these incidents would not only be costly but would often go unresolved.

“We were looking at two or three damaged gate arms a week,” says A. Lamount Worthy, Video Security Administrator, Utah Transit Authority. “It’s usually around a thousand dollars per gate to repair. The new camera deployments give us the means to recover those costs. Utah police can follow up and interview persons of interest, and attorneys can choose which of these cases to pursue. I would say that this year alone Milestone has already saved us tens of thousands of dollars. »

Other savings are more difficult to quantify, but no less important. Worthy says the Milestone system is one of the key components in resolving several serious crimes in police investigations.

Worthy knows that passengers put a premium on safe public transit. If something does happen, UTA has the means to officially capture the incident, and not just have to rely on someone’s iPhone. One of the most important features of the Milestone system is Evidence Lock, a function that secures select video recordings for investigations with authenticated time stamps.

“The encryption and protection Milestone places on its exported video is a key factor of its ability to be presented in court,” Worthy says. “If I have to authenticate a video, I can say with full confidence that this footage has not been tampered with. Our cameras have also captured crimes that occurred off UTA property, and these videos were provided to police to assist their investigations. Without our new video deployment, who knows how many man-hours might have been spent on these? We’re talking about lives in some of these cases – and you can’t put a price on that.”